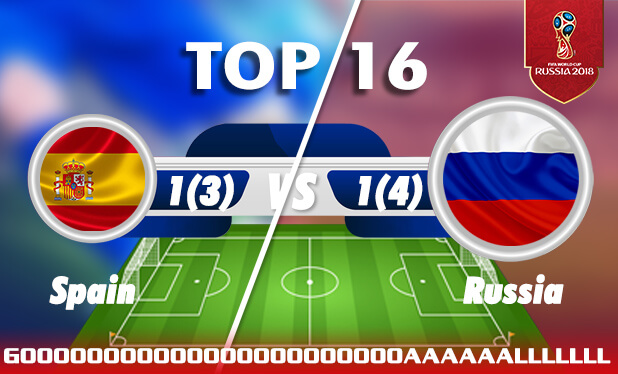 Some insights from the matches on Sunday. Spain vs Russia.
Some history: Russia has never beaten Spain since the breakup of the soviet union. They drew in a friendly back in November 2017 3-3.
At their last encounters, Spain has scored 10 goals against Russia, 7 in two games at Euro in 2008 and 3 in a friendly in November 2017.
Spain is unbeaten in their last 23 games, will they be able to keep it up in this match?
including the 2006 World Cup, Spain have dominated possession in 32 of their 33 games played at major tournaments. 46% was against Germany in the final at Euro 2008.
Since the breakup of the soviet union, this will be Russia’s first ever World Cup knockout match. They were eliminated by Spain when they reached the semi-finals of Euro in 2008.
Match highlights:
Sergei Ignashevish scores the first goal for Spain at 12’ putting them in the lead. Unfortunately, Ignashevish is from Russia and scored his own goal. Striking the heel of this defender and from close range left Akinfeev without a chance to stop it from finding the net.
Spain gets their first yellow card for a handball from defender Gerard Pique. He then starts protesting against the referee. This yellow card results in a free-kick for Spain which they use to their advantage and puts them back in the game. After a long wait and Artem Dzyuba keeping his cool, he manages to send De Gea the wrong way and places the ball into the bottom corner.
At halftime, they are standing at a draw.
Second half starts and we see Russia substituting 3 of their team members out at 46’, 61’ and 65’and getting a yellow card.
Vladimir Granat replaces Yuri Zhirkov
Denis Cheryshev replaces Aleksandr Samedov
Fyodor Smolov replaces Artem Dzyuba
Russia also receives their first yellow card from defender Ilya Kutepov at 54’.
Spain also does a few substitutions:
David Silva replaces Andrés Iniesta at 67’
Dani Carvajal replaces Nacho at 70’
Iago Aspas replaces Diego Costa at 80’
Russia also receives another yellow card from Roman Zobnin at 71’
At 90’ still, none of the teams has managed to score any more goals. At 97’ we see russia make another swop with Aleksandr Yrokhin replacing Daler Kuzyayev.
104’ in and Rodrigo takes Marco Asensio’s place for Spain.
At the end of extra time and we move on to penalty shootouts. In the World Cup, Spain has only won one of three and while this will be Russia’s first ever shoot-out in this competition.
Spains Andrés Iniesta scores the first.
Russia’s Fyodor Smolov ties penalties with Spain.
Gerard Pique scores for Spain again.
Sergei Ignashevich scores another for Russia.
Koke misses the third penalty for Spain while Aleksandr Golovin scores for Russia.
Sergio Ramos ties penalties with Russia for their fourth try.
Russia’s Denis Cheryshev scores their fourth penalty.
All the pressure rests on Iago Aspas to still keep tying with Russia for their final penalty. He shoots and misses the chance for their team to move on to the next round.
Good game played by Spain but the hosting country won in the end with penalty kicks.