that easy
Read up on all the latest sport news, live scores, stats, betting tips and upcoming events.
Menu
| 2 Comments 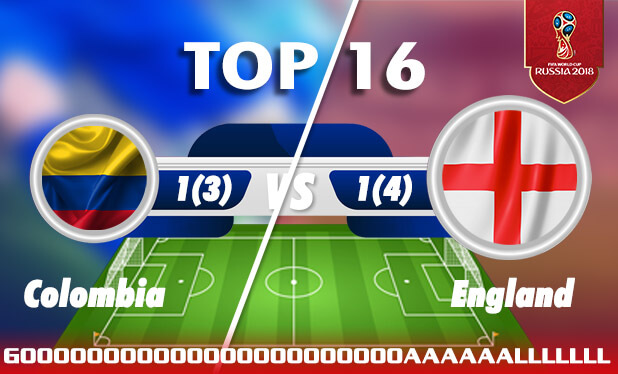 Did you watch the game between Colombia and England yesterday? Heres a few highlights from the game
A bit of history: They have faced each other 5 times where England was unbeaten. Their last encounters were back in 2005 where, thanks to Michael Owen’s hat-trick, they walked away 3-2.
Their previous World Cup match in 1998, England won 2-0 in the group stages thanks to Darren Anderton and David Beckham.
This is Colombia’s third time to reach the knockout stages of the World Cup, but the first time to do so in consecutive tournaments (1990, 2014, 2018) passing the round of 16 in 2014.
Colombia has scored in all of their last 8 matches in the World Cup besides the one against England in 1998 0-2.
Match highlights: 15’ into the game and England Striker Radamel Falcao has only touched the ball twice. Less than any of the other players on the field.
No goal so far at 35’ for both teams. They’ve both managed just two touches each inside the oppositions box.
The first yellow card goes out to Wilmar Barrios, Colombia midfielder, after an altercation with Henderson in the Colombia wall. It could’ve easily been a red card when it looks like he headbutted the England midfielder at 41’.
Halftime and a team have yet to score a single goal.
In the opening half, only one player has managed to complete every single pass they’ve made – England’s John Stones.
Two min after each other and Colombia gets two more yellow cards from their defender and midfielder. Santiago Arias gets an aerial foul on Kane while Carlos Sanchez Moreno pulled Kane down inside the box following a corner.
Next up we see yet another yellow card but this time England gets it awarded from Jordan Henderson, midfielder, for dissent. This while there’s a continues dispute with the referee.
Harry Kane, England striker, steps up to curl his penalty straight down the centre and leading England 1-0. Thus making him the first player to score consecutively in 6 England appearances since Tommy Lawton in 1939.
Next, we see Colombia making a bit of a change to their players with Carlos Bacca replacing Jefferson Lerma at 62’.
Colombia gets another yellow card at 63’this time from Radamel Falcao when the tension starts getting a bit much.
Carlos Bacca who has only been playing for 2’ gets a yellow card for needlessly clipping the heel of Stones.
Jesse Lingard then pockets a yellow card for England for pulling down Carlos Sanchez after he lost possession in midfield.
Colombia makes another substitution when midfielder Mateus Uribe replaces earlier yellow card receiver Carlos Sanchez Moreno at 79’.
Harry Kane’s penalty goal was the only on-target shot so far from both sides.
England substitutes their Midfielder, Dele Alli with Eric Dier.
Another substitution for Colombia when their best defender of the evening gets replaced by Luis Muriel at 88’. Even England decides to do the same and Replaces Raheem Sterling with Jamie Vardy at 88’.
90’ come and go and still, Colombia needs to catch up to England’s lead.
They do just that and at 93’ Colombia’s Yerry Mina puts Colombia back in the game.
Englands makes more substitutions as Danny Rose replaces Ashley Young at 105+2’ and then later at 113’ Marcus Rashford steps onto the field and Kyle Walker steps off.
Colombia makes their last move and lets Cristian Zapata steps out onto the field and earlier yellow card receiver Santiago Arias steps off.
Another yellow card for Colombia and this time Juan Cuadrado is the receiver at 118’.
Still no winner after extra time and we move onto penalties.
Radamel Falcao makes the first goal for Colombia.
Harry Kane makes the tie for England on their first goal.
Juan Cuadrado doesn’t waste Colombia’s second goal and puts it straight in the back of the net.
Marcus Rashford stays on Colombia’s heels and scores Englands second shots.
Luis Muriel breaks the tie and puts Colombia in the lead again.
Jordan Henderson, unfortunately, misses Englands third opportunity and so does Colombia for their fourth when Mateus Uribe tries to score.
England steps up for their fourth attempt and Kieran Trippier scores for England.
Carlos Bacca wastes yet another goal for Colombia and misses their last penalty.
While the pressure is building and only one penalty is left for England, Eric Dier doesn’t let it get to him and kicks the ball straight into the net. England is moving on! Thus making them move onto the quarter-final for the first time since 2006

2 thoughts on “Colombia vs England”