that easy
Read up on all the latest sport news, live scores, stats, betting tips and upcoming events.
Menu

European soccer is back with La Liga, Serie A and EPL fixtures

After the Bundesliga lead the way last month, June will see the return of more of Europe’s most popular soccer leagues. La Liga, Serie A and the EPL are back in action this month and the three returning leagues have some stunning matchups on offer.

Spain’s premier soccer league shut its doors on 10 March with Real Sociedad hanging onto a tenuous fourth place on the log beating Eibar 1 – 2. Since then, the bastions of Spanish football from the Bernabéu to the Nou Camp have been painful reminders of a bygone era.

No longer. On 11 June, Spanish soccer returns with Messi already spotted gracing the fastidiously kept grass of the Barcelona’s home turf. La Liga is set to kick off with Sevilla taking on Real Betis. Although Sevilla are well behind second-placed Real Madrid, the club is in a tight-race to remain in third with just three points separating four clubs.

As the league’s action pushes into the new week, there will be La Liga action from Monday to Thursday. This run will be concluded with Valencia trying to get within striking distance of the top three as they face Real Madrid. Los Blancos will also need the win if they hope to keep within reach of Barcelona at the top of the log.

The last EPL game before the league was shut down was played on 9 March and saw Leicester City trounce Aston Villa with four unanswered goals. Although a week behind La Liga, when the EPL opens on 17 June the opening days promise some exciting matchups.

The Wednesday 17 June opener will see the promising newly promoted Blades take on a Villa side desperate for a win. After this tantalising starter, the action kicks up to high gear with Man City taking on the Gunners at the Etihad. Arsenal are languishing in ninth and would relish a win against second-placed City. Just two days later, Tottenham face United in a matchup that Spurs will be desperate to win.

As the first weekend back rolls around, Villa will be given no respite as they face Chelsea. In other weekend action, Brighton will take on Arsenal, Wolves will travel to London Stadium to face West Ham, and Everton will be a small bump in Liverpool’s march to the 2019/20 EPL title.

The Italian Serie A shut down on 9 March with Sassuolo cementing Brescia’s place firmly at the bottom of the log with a 3 – 0 victory. As the last major European league to reopen, the Serie A has some catching up to do.

The league opener on 20 June will see an all but inconsequential battle between middle of the log Torino and Parma facing off at the Olimpico di Torino. The action won’t speed up much through the first weekend as Inter take on Sampdoria, Lecce face Milan and Bologna draw the short straw opening with Juventus.

After the weekend’s action, the following week will feature Serie A action almost daily as the league attempts to make up for lost time. The week’s action will see Napoli take on Verona, Milan face Sassuolo, and Lecca come up against a second top-three team in days when they travel to Allianz to meet Juventus.

Bet on all the action at Betway

Now that you know what to expect from the EPL, La Liga, and Serie A, head over to Betway to place bets on the fixtures that caught your eye. Betway offers odds on soccer leagues from around the world and allows both pre-game and in-play betting. If you’re new to Betway, register an account and you’ll get a R25 Sign Up Bet you can use to bet on soccer. 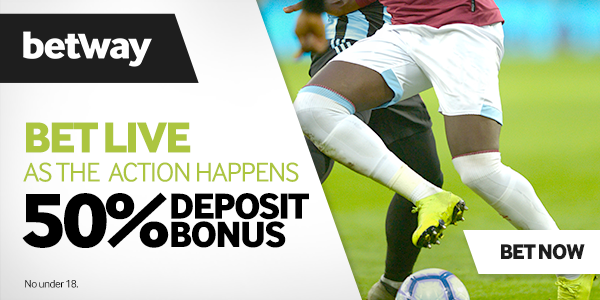